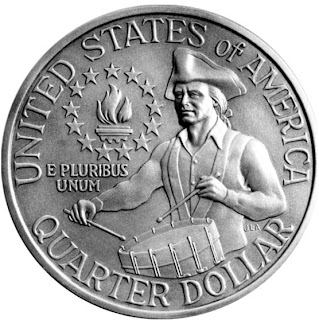 Sterling needed something quick this morning for his class sharing time; the third grade version of show-and-tell.  So he took a bicentennial quarter and told the class about his great-great-great-great-great-great grandfather.
As the story goes, Gideon Burdick was about 14 years old when he served as a drummer boy for General George Washington's army in the Revolutionary War.  He later joined the Church of Jesus Christ of Latter-day Saints.  He moved with the Saints to Nauvoo, Illinois, but was unable to travel west when they were driven out.  He died in the 1840's in Quincy, IL.
I love it when Family History becomes less about names and dates on a piece of paper and more about real people with real lives and stories to tell.
Posted by missy at 4:21 PM

It almost looks like he's wearing a sleeveless shirt.

I know, I thought the same thing. You can easily see where my kids get their bulging muscles!

Welcome to the family, Brady! :)

Wow! That's awesome. :) My kids and husband are through Gideon's daughter, Rebecca Burdick Winters. Which of his children does your line come through?

My family comes through Lucinda Burdick, daughter of Gideon and his second wife Jane.