Not a Moment Too Soon 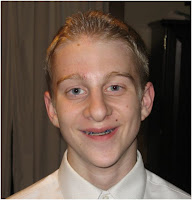 This is the face of a guy who received the Anchor Award at Seminary Graduation tonight.  That means he:
I'm proud of Sam for his accomplishment.  He worked hard to get everything done and he really enjoyed his first year experience.  However, he was a few sections behind in his reading and got a little lazy about keeping up near the end of the year.  So yesterday and today he was in a reading frenzy trying to get done before graduation tonight.  He finished up just in time.  Literally.  I think he actually finished about 2 minutes before the meeting started.

Any suggestions on how to keep this kid from procrastinating will be greatly appreciated!!

WOW! what a great kid!

Congratulations, Sam. That is a GREAT accomplishment. We are so proud of you for doing this. Can't wait to see you in July.