This is it, the year of the 13-year cicada.  We've lived here for 11 years so this is our first experience with the little critters.  I've heard some folks around town saying how bad they are.  I just saw my first one in our yard on Sunday (pictured above), and haven't seen any since, so I wasn't sure what they've been talking about. One friend said she hates mowing around her trees because they drop off and fly out at her.  Another friend is worried for his garden because there are so many cicadas!  I've heard that the last time they were out (1998) the ground was so thick with them that there were some places you couldn't walk without stepping on them.  I'm not a bug fan by any stretch of the imagination, but cicadas are harmless (ugly, but harmless) and I've been anxious to see just what all the hype is about.

Yesterday I found out.

I was driving Savannah to the park to meet some friends.  We took the MINI with the top down and, even though we had the radio on sort of loud, the rattle of the cicadas far exceeded any noise from the radio.  It came in waves - really loud, low hum, really loud...  Jeff had mentioned a few days before that they seem to be attracted to certain trees and those trees are crawling with them.  On campus, there are places where the sidewalk is covered with them.  Jeff can hear them in his office with the window closed.   Yesterday afternoon, while driving Sam to a friend's house, a cicada flew right into my seat in the MINI and then proceeded to try to right himself by rattling around on the floor.  These are the things that accidents are made of.  I had to keep telling myself that it was harmless.  Once we arrived to drop Sam off, we could hear their neighborhood rattling like crazy.  I got out to see for myself and there were dozens of cicadas crawling in the grass beneath one of the trees.  Their shells were abandoned all over the trunk of the tree.  There were several live ones crawling through the leaves of the tree and I realized I wouldn't want to mow around that tree, either!

When we arrived back home, the first thing I noticed was the silence.  No rattle.  No hum.  Just a few birds chirping and the rustle of leaves in the breeze.  Ahhhh.  Apparently we don't have the trees they are attracted to.  Apparently our neighbors don't either.  These 13-year cicadas are a pretty cool phenomenon, but I'm quite happy to observe them away from home.  Thank you, creepy little bugs, for preferring life on the other side of the tracks!

{We still get regular cicadas every year, usually later in the summer.  They are much bigger (2" or more) and they look a lot different (green and wide), but still harmless.  See below.} 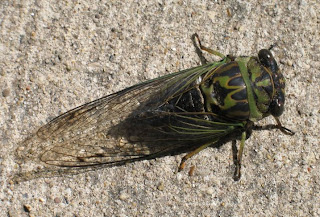 I couldn't help but laugh the entire time I read this blog post. Consider yourself lucky that you don't have to deal with them! They are so bad around our apartment complex. Last night we went to walk the dogs before bed and when Josh opened the front door there were hundreds of them swarming in our stair way. Apparently they were attracted to the light at the top of the stairs. I ran back in quickly and said there was no way I was going down those stairs. Literally the walls, ceiling, stairs, and our door frame were covered. Then each morning when I go out there are tons of them dead all over the stair way so I sweep them up just to have to repeat it all over again the next day. There are so many we have a movie on with the volume up pretty loud, windows closed and air on yet we can still hear them. They are so loud! Harmless yes but also annoying!

Yikes! Remind me not to come visit you on the 13th years! What makes it happen only every 13 years though???