Our Scouting council's annual Pinewood Derby was on Saturday so Jeff and Soren spent a couple hours Friday evening cutting, sanding, and painting his car. Even with the last minute prep, Soren was happy with how his car turned out - cut by dad according to Soren's own design, and skillfully painted all three of his favorite colors by his nine-year old self.

On Saturday afternoon, we headed to the mall for the event. After a couple of hiccups with the weight and wheels, Soren's car was entered in the race. Once they sorted out some problems with the track sensors, the race for the Bear Cubs was ready to begin. Instead of racing in different heats and advancing through the various rounds, it's all done by time. Each car races on each track and the time is recorded by computer. With 12 cars in Soren's group, there were 12 rounds. When all the rounds were through, the times were averaged and the winners were announced.

Soren was surprised and thrilled when they announced his name as the 3rd place winner. His best friend from his pack won 2nd. It turns out, their average speeds - right around 183 mph - were within 1/10 of a mile apart. It was a great finish.

Soren was pretty happy to be the first of our boys to win a Pinewood Derby trophy. Way to go, Buddy! 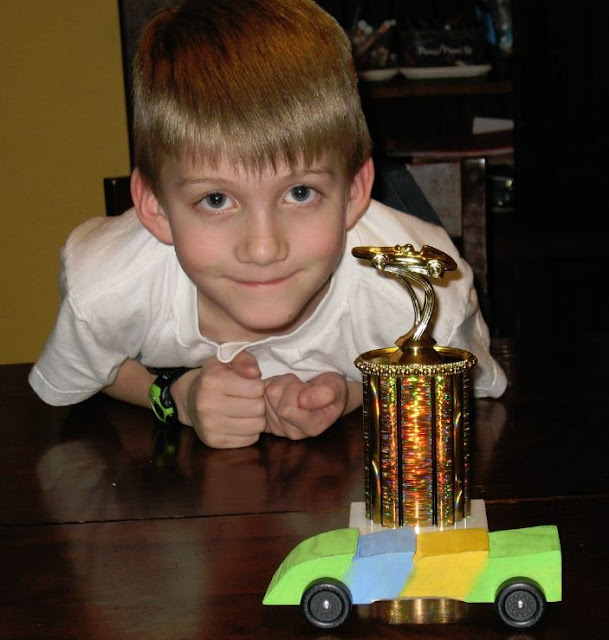 Over the years not a lot of Stowell men have placed in Pinewood Derbys, so good for you Soren!!! We love the keeping of times so that the results are accurate. Talk about cool colors..whoa!!

Congratulations, Soren! Love the design of your car!