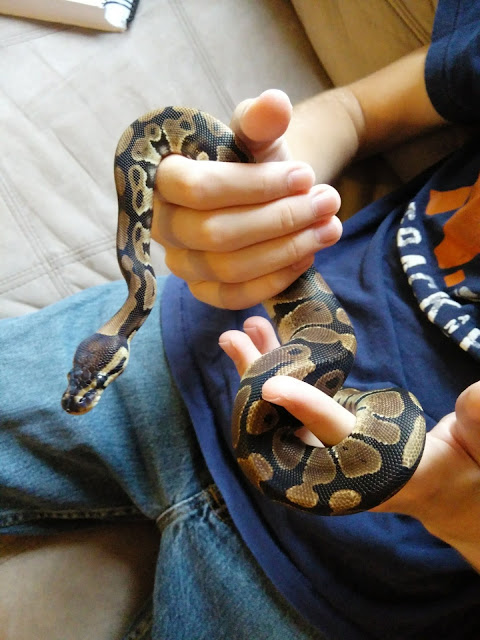 After a month of research and deliberation, Spencer purchased a ball python and named him Forest.

I'm good with snakes. As long as I know they're not harmful (and Forest isn't harmful), they don't bother me. I didn't, however, have any desire to take care of a pet. Spencer was allowed to purchase Forest with the understanding that I won't take care of him. I won't feed him, clean his cage, or pay for his supplies. So far so good.

Forest eats mice. Spencer thaws the frozen mouse then wiggles it around a little until Forest grabs it and eats it. The first feeding was pretty traumatic. Spencer held the mouse's tail between his fingers and wiggled it around. But when Forest lunged for it, Spencer got scared and dropped the mouse...so Forest latched onto Spencer's thumb instead, then quickly wrapped the rest of his body around Spencer's wrist to suffocate his "catch." It was very exciting. Fortunately, Forest didn't hold on for long and Spencer was not deterred. Forest found his real meal. Spencer got online and bought 10" tweezers to feed Forest with in the future.

The most excitement came after Forest had been with us for all of four days. Sadie got home from school and ran upstairs to see how Forest was doing. She immediately ran back down the stairs yelling, "Forest's cage is open!" Seriously? My first question was, "Is Forest still in there?" Sadie didn't know. She hadn't taken the time to look.

I immediately ran up the stairs hoping for the best, but Forest's cage was empty. The only way Forest could have gotten out of the room was the A/C vent. I started seeing visions of waking up in the morning with a snake coiled up at the foot of my bed. He could be anywhere in the house. After a panicked call to Jeff, Sadie and I went back up to start looking. Within a minute, Sadie yelled, "I found him!"

Forest's cage has a slight (~1/2") arch at the bottom. He had climbed out of his cage and had coiled himself up in this small gap underneath. He was perfectly cozy and hidden - exactly what he likes best. That's one of those mistakes that only happens once. I'm glad we got that out of the way and I'm SO glad that Forest stayed nearby.

Spencer is proving to be a great caretaker. He makes sure Forest's cage has enough humidity, he cleans up Forest's messes, he feeds him, and he handles him like an expert. Spencer even helped Forest with his first shed when Forest couldn't manage to do it on his own.

Labels: crazy stuff, projects, spencer, what do I even say to that, worth the money

Not sure my consent would have been given...you are brave😊

how fun...i'm not showing Benson however....

Spencer had good practice with Hoppy!

Sounds like a fun pet, but kitties are better!!!