Spencer has always been inspired by his older siblings and has, in many ways, followed in their footsteps. Spencer wanted to go to All-State just like they did.

Now, I'm not trying to be mean or pick on Spencer when I say this, but music doesn't come as naturally to him. My other kids just get it. They don't really have to think that hard about what to do because it's second nature. That's not how it's been for Spencer. He loves music, but where his siblings have natural talent, he has the work ethic. Spencer practices and works and listens over and over and over and over again.

One evening before bed, he and I were talking in his room. We could hear Sterling and Soren goofing off and singing a song they'd learned in their chorus class. They were harmonizing and sounded really great even though there were some difficult harmonies in the song. Spencer said, "Mom, do you hear that? Do you hear how easy it is for them? They don't even have to work at it and they sound great. I work and work and it's still hard for me." This was a day or two before auditions that would determine who went to All-State. Spencer had been working really hard to prepare, but was feeling overwhelmed. So we talked about why he wanted to go to All-State. I think he felt like he'd be letting us down if he didn't get in because Sam and Savannah both went. I assured him that he has his own gifts and talents and that we don't expect him to do the same things Sam and Savannah did. If he wanted to work hard and try for his own benefit, that's great, but All-State wasn't something we expected from our kids.

I hope that eased the pressure. Spencer continued to prepare and he auditioned as planned. He made it into the District Choir which was a good experience. The All-State kids are chosen from District so Spencer remained hopeful.

It was just before the holiday break when the news came in.

Spencer didn't get into All-State.

He got into HONORS All-State! No joke. I was so happy for him. :) His hard work paid off.


All-State was last week in Peoria. Spencer had the best experience! We drove up for the closing concert. As I sat there listening to the best high school choir in the state of Illinois, I was so grateful that Spencer was able to be a part of it. He earned it! 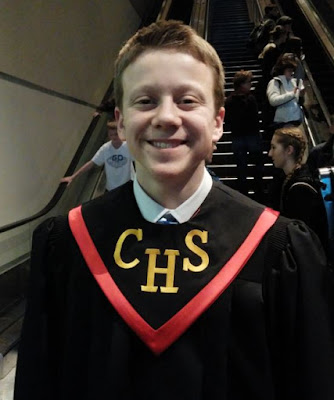