What's In a Name?

The following is a piece I wrote for a memoir writing group I used to attend regularly.  I wrote it back in November 2008 and I shared it with a few people then, so maybe you've read it before.  I came across it the other day and it made me cry (happy tears) so I wanted to share it here...

What's In a Name?
Spencer is our third child and second son. At the time of his birth, Sam was three and Savannah was almost two. Spencer was only about 2 weeks old when the impression came. Sadie Jennifer. It was just a name that popped into my head, but it was more than that. I knew somehow that someday we would have a little girl named Sadie Jennifer.
A couple of years later, when we learned that baby #4 was on the way, we wondered if this would be our Sadie. An ultrasound showed otherwise. Having no boy names picked out, we embarked on a thorough name search and finally narrowed it down to 2 solid boy names: Sterling and Soren. I love the name Soren. While I have been accused of such, I didn't make it up. It is Scandinavian. In Sweden, for example, if a man named Soren has a son, the son is literally “Soren's Son” which is where the last name Sorenson comes from. It means “Warrior” or “God of War”. That was our first choice, but then there was 9/11 only 2 months before this little boy was due. Suddenly, “God of War” seemed so ominous in the face of these frightening times. I couldn't do it.
And so Sterling (meaning “genuine”) made his debut mid-November. He is a delightful and very busy little boy. In fact, Sterling gives the word “busy” new meaning. As a toddler, he frequently achieved tornado status. While little Sadie was always in the back of our minds, we couldn't imagine life without our little “Boog” as he's come to be known.
A year later, baby #5 was on the way. But this pregnancy wasn't as smooth as the others. At fourteen weeks along, on Christmas day, I seemed to be having one last bout with morning sickness. It was worse than usual and I felt crummy all day. But it didn't go away and I was sick all night, too. It turns out I got appendicitis for Christmas. I had my appendix removed the following afternoon. The baby's heartbeat was strong after surgery and we hoped for the best.
Two weeks later, on a Tuesday morning in January, our little family of 6 was stuffed into an ultrasound room at the hospital. When the technician told us we were having a boy, big sister Savannah was very disappointed. But it was all put into perspective when I received a call from my doctor later that afternoon. There was a possible problem with the baby. Something about an abnormal fluid collection at the base of the skull. Suddenly it didn't matter so much that we would have to wait a little longer for our Sadie. I just wanted this baby boy to be okay.
The Maternal Fetal Specialist told us that most likely the baby had Down Syndrome. He said there was a slight possibility that it could be a couple of other conditions, both of them much worse than Down Syndrome, and a very small chance it could end up being nothing. But while Down Syndrome babies often have heart problems, our baby's heart looked strong. The limbs were also normal in appearance when frequently they are shorter than they should be. But still, “This baby has Down Syndrome” were the words we left with that day.
And then we knew. His name would be Soren. Warrior. God of War. He would have to be our little fighter. It was the perfect name.
A month later, the specialist said that he still thought the baby had Down Syndrome, but there was a much higher possibility – did he say 50%? - that there was nothing wrong. Another month and the chances of a healthy baby increased. And at our next visit we heard the words, “I can't find anything wrong with your baby.”
Our little Soren was born, perfectly healthy, in mid-July. He's a beautiful child. My friend calls him the Gerber baby because of his perfect skin and angelic face. He's a total mama's boy, preferring me above all others. I still love his name. In today's world, he'll need to be a fighter for sure. And, like Sterling, what would I do without my little Soren? More than once I've wondered if Heavenly Father let me know about Sadie so that I wouldn't stop having children before getting these boys here, too.
And what about Sadie? Two years after Soren was born, I was entering the last month of what felt like a very long pregnancy. I specifically chose to not find out the gender of this baby at our routine ultrasound. With Sterling and Soren, I'd gotten to 7 months pregnant – which is a very uncomfortable time for me – and wondered if I'd really be able to go through pregnancy again to try one more time for the little girl that already felt like a part of our family. This time around I needed to think, especially at 7 months, that this might be it. This really could be our little girl that we'd known about for 6 years.
And so it was, unknowing, that we left for the hospital late on that July night. And in the wee hours of the morning I heard the doctor say, “It's a girl!” as he lay little Sadie on my chest. At that moment I knew. I knew that I had done the thing I was meant to do. I never imagined 6 years earlier that in that one name, Sadie Jennifer, I'd get three children. Sadie was meant to be a part of our family, but so were Sterling and Soren, every bit as much as Sam, Savannah, and Spencer. My family was complete. 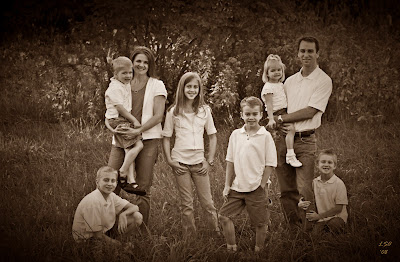 Your family is beautiful. I don't know why but I got teary reading this even though I already knew the story. Maybe because our family story is a little similar. I had a dream about a girl capping off our family a long time ago and cried when Christopher was coming. I was sure his adoption would not go through because he was not a girl, but it all worked out. It just goes to show that we are not in charge:).