Last night, Jeff went to pick up Savannah from her friend's house. Sadie was sound asleep in her bed and the three youngest boys were all tucked in for the night. Sam, never one for sleep, was most likely reading upstairs or caring for his plants in his greenhouse/office. I was working on a project at the table and finally decided to call it a night.

The house was quiet as I walked into my bedroom. Then I heard something - was it music? I couldn't make out the tune. When the music stopped, I heard a quiet muffled voice.

"Hello? Somebody. Anybody. Please let me out!"

The voice was so quiet I thought about convincing myself I hadn't heard anything. I listened for a few seconds more and then the music started up again. I managed to unstick my feet from the spot where they'd frozen and started to investigate.

Sound travels unpredictably in my house so I couldn't tell if the sound was coming from upstairs or down. I stopped at the base of the upstairs and listened. Silence. As I entered the basement staircase, I heard the music louder than before. I followed the sound and ended up in our storage room. In the back corner of the room is a smaller room where the original owners of the home used to keep their honey. We use it for our long-term storage. It has an old door - original to our 1916 home - with a crude latch that we never close. But last night the door was closed and I was finally able to relax when I realized Sam was in there playing his violin. 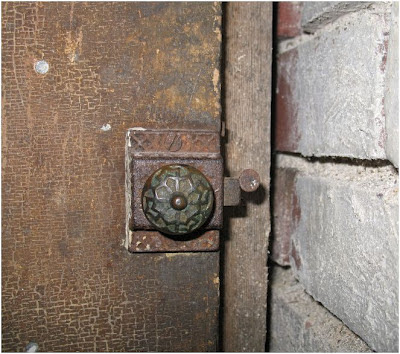 Sam was visibly (and audibly) relieved when I turned the latch. It may not look like much, but it turns out it is impossible to open from the other side of the door.

Sam had been stuck in there for an hour. He had just wanted a quiet place where he could play around with some made up tunes on his violin. He shut the latch before he realized it was one-way. (Having lived here for 12 years, you would think we'd have learned this before now!)

We had a good laugh about it and joked that Sam wouldn't have starved because of the year's supply of peanut butter he was serenading.

Update (5/31/12): I was reading in bed last night after posting this entry. The kids were home from their church activities and there was talking and playing heard in various corners of the house. I heard some muffled yelling that sounded like it was coming from the toyroom above. Then I heard it again, a little more desperate this time. Then I heard, "Please, somebody let me out!" Savannah and I ran downstairs to find a frantic and traumatized Sterling locked in the remote storage room just like Sam had been. Once he settled down enough to talk, he said he had gone in there so he could prove Sam wrong and show that it's not impossible to get out. That didn't work out so well... Fortunately he hadn't been there long and was soon able to laugh about it with us. To make sure this doesn't happen again, I bent the nail so the latch has nothing to hook onto. Whew!
Posted by missy at 7:56 PM

How pleasant! Glad you found him before he ate the entire year supply of peanut butter! Happy practicing Sam! (I think we need a one way door for practicing around here....practice, and then i will open the door.)

All's well that ends well, I guess...little too much trauma involved however!! Looks like this will be an interesting summer at your house considering how it's beginning!!

This knob would look great on display in your china hutch or something...definitely an antique!

phew! So glad everyone is not locked in anymore.

Glad everyone's safe, but it's kinda scary. I hope the room doesn't look as scary as the door latch.