Wow! It's been quite a month.

In the Church of Jesus Christ of Latter-day Saints, we have a prophet and apostles. They direct the affairs of the church and provide leadership and counsel to the members - well, the whole world, really. They are inspired by God and are representatives of the Lord Jesus Christ. They speak to the general membership of the church twice a year at general conference. But with 15 men (the prophet, his 2 counselors, and the 12 apostles), you can imagine how rare it is for the 15 million members of the church to actually cross paths with one of them.

Last month, I got to spend time with three of them.

On May 2, Jeff had several hours of priesthood training meetings in St. Louis. Other stake presidents in the surrounding area were also there with their counselors as well as the bishops in each stake. Elder Cook (fifth in the back row in the photo above) was presiding. Also there were Elder Soares from the Presidency of the Seventy and Bishop Stevenson, the Presiding Bishop.

I learned a couple of weeks earlier that the stake presidents and their wives were invited to have lunch with these presiding authorities before the meeting. Our family had several other things going on that day and company in town. It meant a 2 1/2 hour drive each way for a 45-minute lunch. Jeff would then stay at the meeting and I'd drive home alone.

But how could I not go?

So I went and I'm so glad I did! I was introduced to and shook hands with each of the visiting authorities. They were so kind and easy to talk to. The meal was delicious. But my favorite part was at the end of the meal when Elder Cook shared his testimony. As he shared his special witness of the Savior, I knew that he knew.

The very next day, Elder Bednar (fourth in the back row) was in our stake for the blessing of his new grandson. He spoke to the congregation and met with the youth. I shook his hand and spoke briefly with his sweet wife. Because his son is one of Jeff's counselors in the stake presidency, I've met Elder Bednar before. It's always a treat when he visits. I'm grateful that he always tries to spend time counseling and instructing the youth. His visits have been a blessing to my kids! When I think of Elder Bednar, I always remember that we are agents to act, not objects to be acted upon. We have the ability to choose and the responsibility to choose wisely.

At the end of the month, we had stake conference. We weren't expecting a visiting authority until our next stake conference in December, but then Jeff was informed that not only would we have one at this conference instead, but that it would be Elder D. Todd Christofferson (sixth in the back row)! We were so excited! The Apostles don't preside at many stake conferences anymore so it was a real treat.

A new Seventy, Elder Scott, came with Elder Christofferson. After we all enjoyed a nice lunch together on Saturday, I spent an enjoyable afternoon with Sister Christofferson and Sister Scott. Sister McNabb, one of Jeff's counselors wives, drove us to Amish country and we enjoyed shopping and admiring the beautiful Amish handcrafted furniture. Then we went to the stake center for another meal before the evening meeting. Savannah had texted me asking if Elder Christofferson was as handsome in real life. I told her he looks exactly the same. I shared this with Elder Christofferson and he just laughed and said, "If only!" :) He is funny and warm and so, so kind. Jeff said he is the most gentle man he's ever met.

The kids met him on Sunday morning. He suggested we get a picture together. Sadly, my usually great camera chose that moment to malfunction. Of the dozens of pictures taken, none of them turned out. Most of them looked like this: 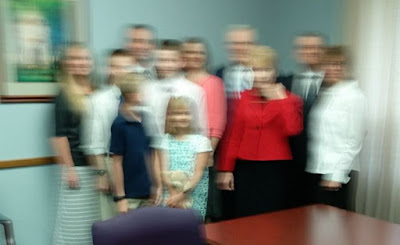 There were quite a few where most of us were looking, but always there was at least one person looking away: 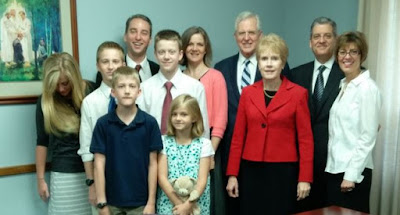 This one is my favorite where no one is looking at the camera: 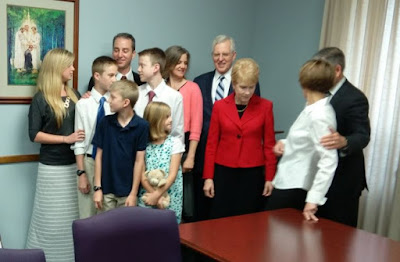 This one is probably the best: 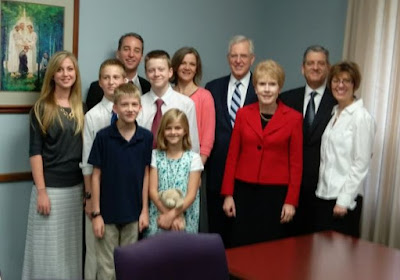 Why the camera wouldn't work when we were all ready for the photo, but took multiple photos whenever we weren't, I'll never know. Crazy.

With all three of these meetings with Christ's chosen Apostles, I was overwhelmed by the conviction that these men are called of God. They don't preach with a spirit of fear and they don't force. The love and kindness that they exhibit and the spirit they carry is what I imagine I'd feel if Christ himself had come in their place. They are witnesses of Him.