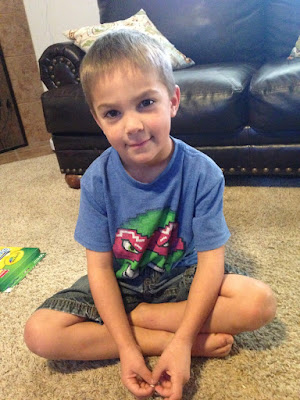 On Thanksgiving, we each wrote our name on a little slip of paper. Then everyone drew a slip and, in turn, said why we were thankful for the person we drew. It was all going along well until we got to Christopher. He drew Uncle Jeffrey and was shy to take his turn. Dave, his dad, couldn't convince him to say anything about Jeff so he told Christopher to say why he was thankful for him, Dave.

Dave said, "Why are you thankful for your dad?"
Without hesitation, Christopher answered,


"Because he sleeps in so I can do fun things with my mom."

It took a while for everyone to stop laughing.

Later on, Tanya (Christopher's mom) provided some context for his answer. Just that morning she had taken the time to tell each of her kids why she was thankful for them. When she got to Christopher, she told him she was thankful that he got up early with her so they could spend time together in the mornings while everyone else was still sleeping.

With that, Christopher's answer made perfect sense.
Posted by missy at 10:22 PM

Labels: crazy stuff, cute, family, funny, gratitude, holidays, what do I even say to that