Isn't this the greatest picture? If I had to pick my favorite pilots, these three would top my list! Click Here to read a little about the event that brought them together. 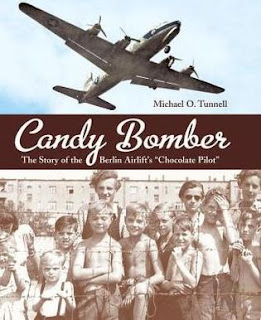 Gail Halvorsen (far right), also known as "The Candy Bomber," is one of my heroes. I first learned his story in 2012 when the Mormon Tabernacle Choir paid tribute to him in their annual Christmas concert. You can hear Tom Brokaw tell the story in the video below. (You might want to grab a tissue...)

Then a few months later, I read a book recommended by one of my kids' teachers that told the whole story of the Candy Bomber. It makes my heart happy (and tears leak out of my eyeballs) when I think of the lives he's touched and the difference he made at such a dark time. In short, World War II was over, but Germany was in pretty rough shape. Operation "Vittles" had U.S. Servicemen dropping food and supplies in the war ravaged cities to help the civilians survive. Gail Halvorsen started dropping candy and gum in little handkerchief parachutes to the children that would watch the planes come in. His idea took off from there. For so many, these little bundles from heaven were a light in the darkness.