What Is That Thing?

Well, I did it! I managed to blog every day in February. I will admit there were many days where I just wanted to forget the whole thing, but it was good for me to come up with something happy every day. I'm glad I did it and I'm glad I have a record of all the little things I normally skip over. I'd like to get in the habit of posting more than before -- but not every day. :)

So for today, I thought I'd post something completely random and a little bit freaky. I found this in the far reaches of my freezer: 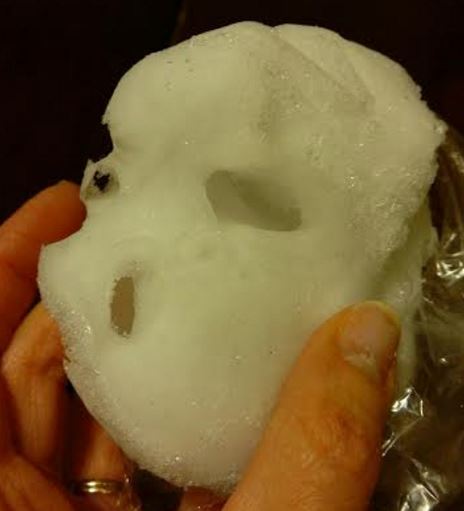 What on earth? Any guesses?

My first thought was that one of my boys was trying to preserve some poor creature's skull. In my freezer. With the food. Ew. Then I thought it was an extremely old, forgotten snowball that someone intended to save so they could pull it out in July. As in last July. Which led to the thought that I really need to clean out my freezer more often.

Still unsure what I was looking at, I naturally put it back in the freezer. When I found it again a couple weeks later, my kids were home so I asked if they knew anything about it. Spencer was the one who solved the mystery of the frozen skull snowball.

Spencer received a shipment of frozen mice for his snake that were packed in dry ice. Being the scientist that he is, he proceeded to conduct all sorts of cool experiments. When he was done, he had a few little chunks of dry ice left so he put them in some water and left them outside for a while. When he came back, the water around the dry ice was starting to freeze. He eventually put the remains in the freezer and forgot about it.

Fast forward a few months... And that is how to make a skull snowball. :)

Labels: crazy stuff, goals, how to, my world, nerdy, spencer, what do I even say to that