Before and After: A Bathroom Makeover

Last spring, we purchased a cute little two bedroom rental home. It's just down the street from us and didn't need too much fixing up. But the bathroom -- Ugh! It was so weird! It was just a really bizarre set up.

This is where I'd insert the before pictures...if we had any. Somehow we can't seem to locate the pictures we thought we took before Jeff started on this project, so let me try to explain what it looked like. (I'll add pictures if/when they turn up.)

The main part of the bathroom had a 1970's green tub and shower. The sink was okay, but was way too big for the space which put it too close to the gross toilet. There was a weird step to access the tub/sink/toilet area. The flooring was a hodgepodge of various types. The walls were a horrible yellow paneling below with something rather forgettable above. At most, the whole room is only about 8'x10', so it's pretty small. That includes three doorways. Two of them lead straight through from one bedroom to the bathroom to the other bedroom. The other leads into a closet.

Jeff tore everything out and started over. Here it is after he worked his magic...

Doesn't it look great? It is SO much better than before and just right for the space. It feels open and spacious and bright and that funky step is gone. Jeff does great work!

The above pictures make me happy which is why this is on my blog. :) Yesterday the above "after" pictures became the "before" pictures...

Sadly, there was a fire yesterday. Here is the latest shot of the bathroom: 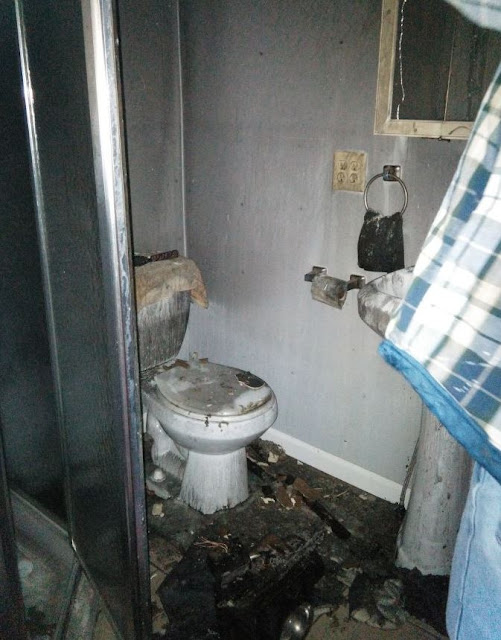 We've got our work cut out for us. The bathroom ceiling has a huge hole where the firefighters axed it open to cool off a hot spot. The fire burned in one of the bedrooms, but most of the home has smoke damage. Not to mention the 6 windows busted out to let the smoke escape. 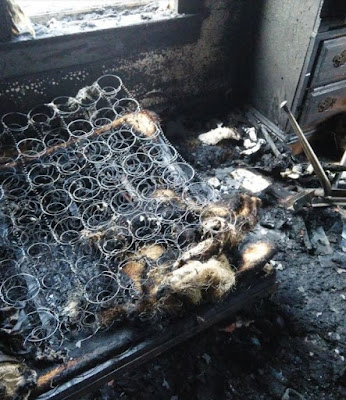 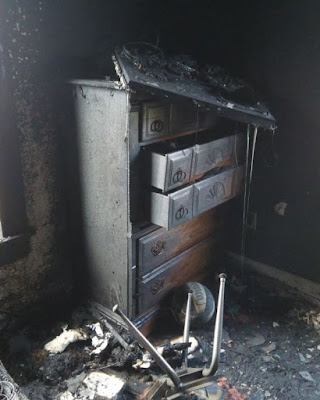 The good news in all of this? No one was hurt. No one was home when the fire was discovered. Stuff can be replaced. It'll take some time, but we're still counting our blessings!

Oh my! That just makes you want to cry!!! I'm glad you are able to look on the bright side and count your blessings.

It sure looked nice before the fire! :)