In true BYU fashion, BYU won their football season opener against Arizona with four seconds to spare. The final score was 18-16. Not a high-scoring game by any means, but we won and that's what matters. With a new head coach this year, this win was important to get us off on the right foot.

Of course, the game against our biggest rival this coming weekend will be pretty telling as well. The University of Utah has a five-game winning streak against us so a win against them would be awesome!

My favorite part of the game last night was that Sam was there!! Just over a month after returning home from his mission, he was back in his beloved Arizona. He loved being there. He told me he felt like he was home.


Sam drove down to Arizona with my brother, Rob. They stopped to pick up my dad for his very first BYU football game on their way down. Rob and I are the only ones in my family of 7 kids who attended BYU. My parents never chose sides (even though they went to the U), and sports weren't that important to them. But I'm happy that my dad finally made it to a game. It was a good one! 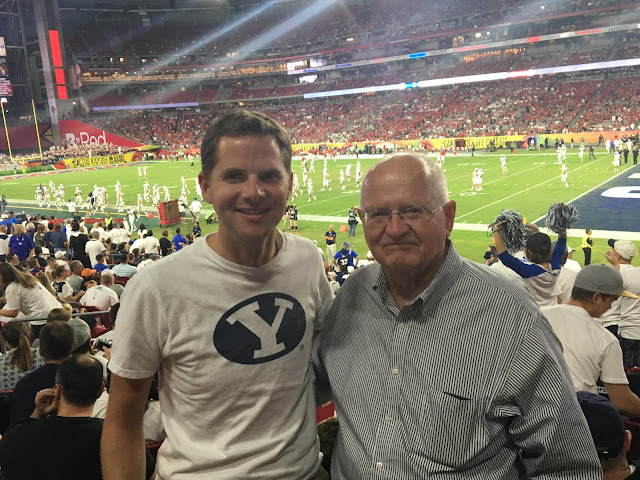 I think they should have kicked the ball at the end and gone for the tie.