You've probably never heard of a shrimp bug. That's because we made up the name. Years ago at certain times of the year, we would find these large bugs in our basement that sort of looked like a cricket, but they were brown with super long antennae and really long legs that could jump like 3 feet or more. They were terrifying. Their bodies sort of resembled a shrimp so we named them shrimp bugs and we all hated them. 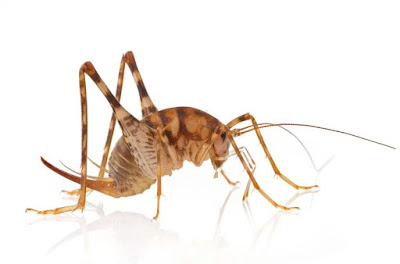 We later learned that they are actually called Camel Crickets, but we still call them shrimp bugs. We still get them. We still hate them. Unfortunately, we've had more than usual this year.

Sadie found one on the stairs last week after everyone had gone to bed. It was pretty late, but she was determined to make sure it wouldn't crawl (or jump!) into her room during the night. Here's the contraption she came up with: 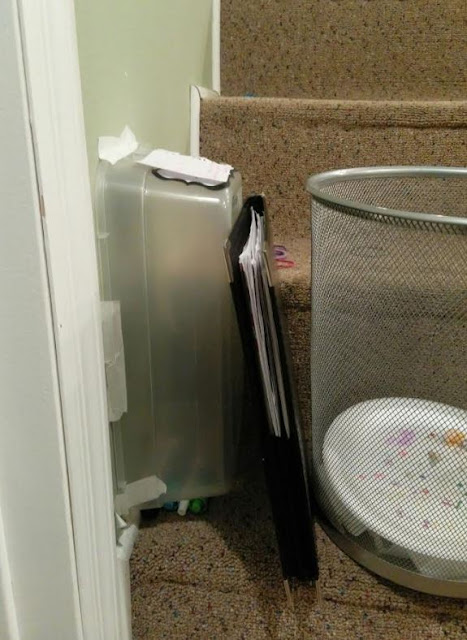 You can see a few purple and pink ponytail holders on the stair behind the black folder. Sadie initially fired those at the bug to see if she could just annihilate it outright. It never moved so she thought maybe it was dead. See the markers and highlighters under the tub against the wall? She tried those next, throwing them at the shrimp bug which annoyed it enough that it crawled up the wall. She trapped it against the wall with the plastic tub, but then she was stuck. She couldn't let go or the tub would fall. She reached as far as she could and was barely able to grab Sterling's music folder which she propped against the bucket while she ran for tape. Once she secured the bucket to the wall, she kept the folder there for extra support then put her trash can next to that for added peace of mind.

When I went downstairs the next morning, this note was on top of the bucket:

Fortunately for us all, camel crickets aren't invasive. They don't bite or get into food or otherwise cause trouble. They are just really big and ugly and terrifying. Sadie is the only one who sleeps in the basement and that's the only place we've found them, but I'm not worried about her. She's obviously got it under control.
Posted by missy at 9:11 AM

Labels: crazy stuff, family, funny, how to, nature, Sadie, what do I even say to that

That is SOOO funny!!! I'll bet she got her Blizzard AND Medal of Bravery! She deserves it for her resourcefulness!!! Great job, Sadie!!!