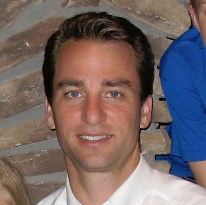 I got the best one.  I can't tell you how many times I've realized that over the past 15+ years.  I remember, a year or two out of High School, sitting at my friend's bridal shower and hearing her say, "I feel sorry for the rest of you because I got the best one!"  Well, I can definitely say the same about Jeff.

There are so many reasons why I think Jeff is the best.  But the point of this post is that Jeff can fix just about anything.  He saved us hundreds, if not thousands, of dollars during college when he would grab his Haynes manual and his tools and fix whatever was wrong with the car.

Shortly after moving into our house, when we found water leaking down the walls of our main-floor bathroom from the upstairs bathtub, Jeff said he knew nothing about plumbing and called a plumber.  The plumber couldn't make it for a day or two so Jeff decided to brave the crawl space and take a look.  After about ten minutes, he'd saved us at least $100 and we happily canceled the plumber.

Then there was the memorable moment when, at 7-months pregnant, I stepped on Sam's violin with a sickening crunch!  Jeff fixed that, too.  As Sam's teacher said, we'll never be able to sell it, but Sam and Sterling both played it until they grew into the next size and Soren plays it now.  I'm just glad we didn't have to buy a new one.

When my parents were here for Christmas, they got locked out of their luggage.  Jeff was able to open it and he figured out the combination (which they never knew) so they'll never get locked out again.  My mom brought her laptop she'd been having trouble with.  Even the "computer guys" who had looked at it were stumped.  I have to admit I was nervous when Jeff started taking it apart.  But before long he'd fixed one problem, put it back together, and then later took it apart again to fix another.

Our wii broke right before Christmas break.  Jeff thought the reset button was jammed and he just needed to open it up and pop it back out.  You need a special screwdriver to open the wii and due to various issues, we had to wait weeks for that to arrive.  [Note:  Do not break the wii right before Christmas and then let Santa bring new wii games.  Torture!!]  Once the screwdriver finally came, Jeff quickly realized the reset button was not the problem.  So he did a little research on the internet and then proceeded to take the entire thing apart.  Not finding anything that was obviously the problem, he started putting it back together again.  When he put one part back in, it snapped into place rather than sitting loose like he found it.  Wondering if that fixed it, he got it all back together and... It worked!!  The kids hailed Daddy as the hero and are evermore convinced that Daddy really can fix anything.  I could go on and on.

This quote, attributed to Pablo Picasso, is Jeff in a nutshell:  "I am always doing that which I cannot do in order to learn how to do it."