In 2005, Jeff, Sam, Savannah and I were cast as extras in Joseph Smith: The Prophet of the Restoration.  We took the family and stayed in Nauvoo for a few days so we could participate.  It was long and hot and humid and monotonous -- filming the same scenes over and over and over and over...take one...take five...take twenty-seven... But I think we'd all do it again if we had the chance.  Just being involved was a privilege.

We'd known about it for 6-8 weeks before filming.  We weren't supposed to cut our hair and Jeff couldn't shave.  Jeff participated in filming for 2 days and Sam, Savannah and I had one day.

This is Jeff on the set with the actor who played Brigham Young.  Jeff had quite the shaggy beard until, in make-up the first day, they shaved off the front so he was left with lamb chop side-burns.  Nice... 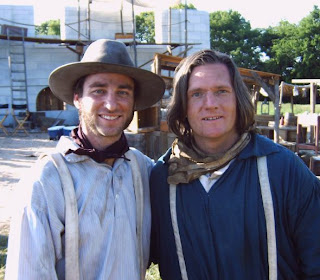 Here are Sam and Savannah after coming out of make-up, which consisted of dark brown powder to make us look dirty.  Sam's hair is so blonde that they made him wear a wig so it would show up. 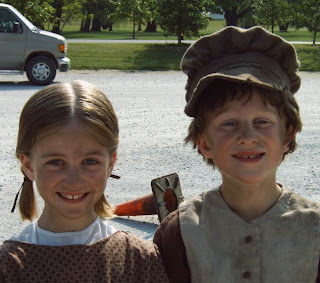 {I am not posting pictures of me on purpose.  This is my happy blog and, well, let's just keep it that way.  At seven months pregnant, with no make-up, frighteningly ugly hair and an old-woman bonnet, Jeff said he's glad I was not a pioneer when he married me.  I rest my case.}

If you get a chance to watch the film, and you don't blink, you may be able to spot one or two of us if you know where to look. After our three days of filming, we ended up with 12 seconds of screen time.  But even if it had all ended up on the cutting room floor, it was an awesome experience!

That is so fun that you got to do that. My bro-in-law was the location manager for work and the glory so one of the summers my mom and i went out to Tennessee to watch the filming. it was pretty fun. we got to see the printing press being pushed out the window. Being on set is a great experience. so fun that you got to be in that film.

Our family loves this film. We have seen it more than a dozen times while living in UT. We were happy it came out on video before we left so we could bring it with us. :) I forgot you were in it and when I saw the scenes you were in especially the one where Joseph is preaching after he was tarred and feathered I could not believe I had missed Jeff all these years. HA! The kid who played Young Joseph went to HS with my niece and we saw him just before we left as he was working at Hancock Fabrics. HA HA!