All In A Day's Work

It all started last week when the director for the High School play asked Sam if he thought his mom could make a couple of straw dolls.  Sam, who thinks I can do anything, thought there was a good possibility I could.  Despite being completely clueless as to where to even start, I decided that since I recently dusted off my sewing machine and had tackled a few minor projects, I'd give it a go.  I got a general idea what the director had in mind then spent a few days gathering the needed supplies and finally, this morning, I got to work. 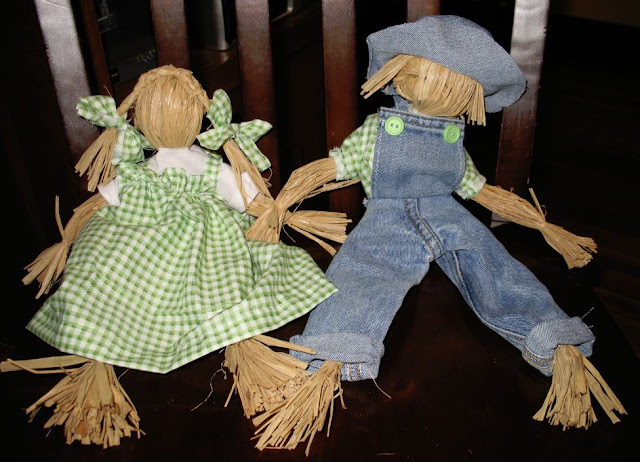 I know they don't look like much - they are meant to look rough and hastily made - but they were harder than I expected.  However, I'm relatively pleased with the outcome and hope they will suffice for the purpose intended.  Altogether, I probably spent somewhere between 4-5 hours on them and I'm more than happy to have them crossed off my to-do list.  There's nothing like completing a project you weren't sure how to do!  I don't know how they are to be used in the play - one of my kids thought maybe they'd throw them out to the audience.  Somehow, I don't think so... :) - but the play opens in 2 weeks so we'll know soon enough.
Posted by missy at 10:52 PM

I think these look fantastic. And isn't it nice when our kids think we can do anything and then we prove them right

Very cute! I think you can do anything too!!!