I Was Having a Big Smile On My Face

The phone rang before 7:00 this morning. The recorded message was the unmistakable voice of our school superintendent who started out with, "I am sorry for the late notification, but..." Every child within hearing range immediately assumed school was canceled for the day. I think they may have been holding their breath as the message continued. They were completely deflated as he went on to say that the neighboring town lost power in last night's storm and, as it hadn't yet been restored, that school would be closed for the day.

Sadie, not at all pleased that the message hadn't gone how she'd hoped it would, dejectedly said, "I was having a big smile on my face." But the smile was gone and the kids somehow mustered up the energy to get dressed and out the door for school.

The storm last night was pretty bad. With temperatures in the very unseasonable 60's yesterday, those numbers had been dropping steadily ever since bringing pouring rain along with the cold air. There was some wind, but not much in our little corner of the world. However, our friends who live in the neighboring town (the one that lost power) were devastated. They own an old mental-asylum-turned-haunted-house that had the roof ripped completely off. Debris was scattered all around their property, through the adjoining field and clear across the road 1/4 mile away. Somehow there was no damage to their mobile home, farm animals, or truck on the same property. Other than a few pigeons, no lives were lost. That's the good news. 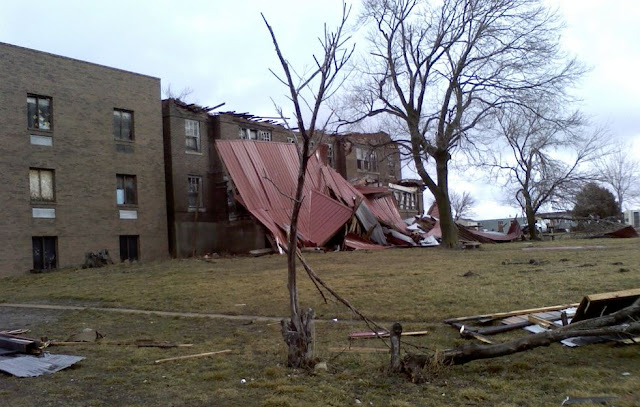 I drove out to their place after the kids were at school to see what I could do to help. I was surprised at the number of huge downed power lines all along the several mile drive, bent over and mangled as if they'd been toothpicks. I heard later that there were 49 utility poles that had to be replaced. There were more than a dozen power company trucks working to get new poles in the ground, but the thick mud from the saturated ground wasn't helping things along.

I stayed for about 3 hours piling up scattered debris from the yard and road. The stuff in the field will have to wait until the ground freezes. One little girl who came to help with her mom got stuck in the mud up to her ankles and lost her shoe when they pulled her out!

Initially the weather wasn't bad. We kept working when it started to rain. Then it rained harder and the temperature dropped. We even stayed out when the wind kicked in, but then it picked up and we were being pelted so hard in the face by heavy rain and there was a threat of the roof metal being picked up by the wind that we were forced to wait out the storm in the basement of the asylum. After 45 minutes and no signs of slowing, I finally headed home.

My kids were hoping for a "snow day." I'm just grateful we (and our friends!) are all safe. Hopefully Sadie can have a big smile on her face about that. :) 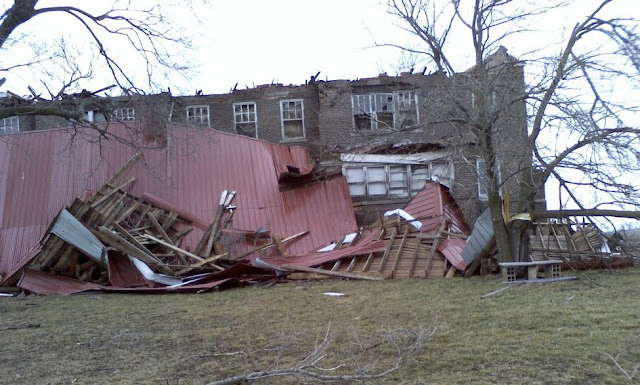 Wow! Those are sad pictures. Sorry for those who had damaged property and sad your kids had to go to school. I might have had to let the kids stay home, but you know me.

Wow! So glad you are all safe!

Two of the pictures don't show up on my computer. :( I got the one with the roof blown off.

Oh, I got the pics now after redoing your blog.