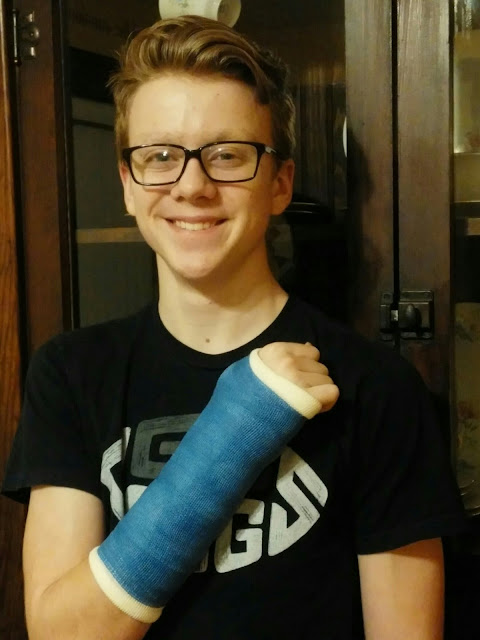 It was bound to happen. After almost 22 years of marriage and 6 kids, Spencer has been awarded the "First Broken Bone" medal. We're feeling pretty blessed that we made it this far without prior visits to the Orthopedic Surgeon. That's not counting Jeff, of course, who broke the rod in his leg 11 years ago and had to endure several surgeries to make it right. His was a pre-existing condition from before our life together.

Spencer's break happened last Thursday in P.E. when he was shoved during indoor soccer and went down hard on his hand. He broke his radius. He was in a temporary cast over the long weekend and received his real cast this morning. The good news is that this should be a quick fix. The doctor informed Spencer that, surprisingly, his growth plates haven't closed yet. His exact words were, "You have the growth plates of a 15-year old." Usually, by age 17, they would expect to see the growth plates closing. Bones heal faster in kids who are still growing so the doctor said he could graduate to a splint in less than 3 weeks if all goes well. :) Of course, Spencer was thrilled to know that he's still got some growing to do!

Fortunately, Spencer broke his right arm and he's left handed. There are many reasons why this could have been a lot worse. We're still counting our blessings!
Posted by missy at 9:17 PM

Labels: crazy stuff, my world, school, spencer, what do I even say to that

Hope Spencer has a full recovery and all goes well. ♥ ♥ ♥

I wonder if my growth plates have closed. .. ;) Spencer, i hope it heals real fast, and I hope you aren't like sawyer, the first and second broken bone!

Spencer, you are now a Stowell warrior! And you didn't even grow up on a farm! By the way, your Dad did a lot of growing after high school on his mission. Sam could well have competition for height yet!