Hands down, our game of choice these days is Ligretto. My brother introduced us to it last spring. It's similar to Solitaire, but you can have up to 12 players and it gets crazy!

A few things I love about it: 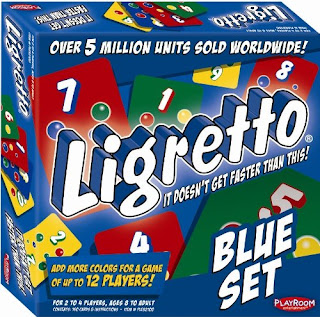 Each box set contains four decks -- one player per deck. If you buy the Blue, Green and Red sets, you'll have 12 decks which would be total madness, but a really great time! We love it!
Posted by missy at 10:03 PM