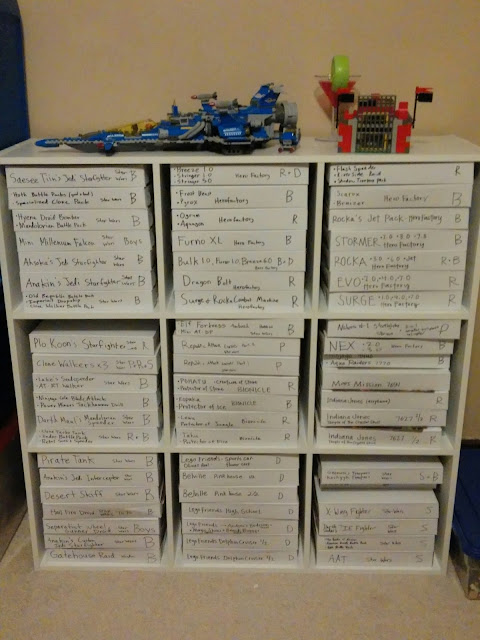 I know it doesn't look like much, but welcome to the Lego files. (Maybe I'll replace this with a better photo someday or maybe I won't. You get the idea.)

We have a LOT of Legos. Many of them are various colored bricks in buckets that the kids can use to build whatever their imaginations come up with. It was the sets that had me baffled. What do you do with the sets? The boys wanted to display them, fully assembled, on shelves, but we ran out of shelf space long ago. So we disassembled many of them and put them in big ziplock bags and stored them in tubs, but the tubs took up so much space and then it was "out of sight, out of mind" so they were basically forgotten.

One day, after the kids got some free pizza "kits" as a prize from our local library, I was looking at the small pizza boxes they came in and had an aha moment.

I ordered a bunch of 10" craft "pizza" boxes and a 9-cube storage shelf and put the kids to work. Each lego set was broken down and put in boxes. The biggest sets fill up two boxes each while some boxes contain 2 or 3 of the smaller sets. We labeled each box and indicated who it belongs to and stacked them up on the shelves. Now it's easy for the kids to find specific sets, plus they get the fun of rebuilding them whenever they want. The "Lego Room" stays cleaner and mom stays happier. It's a win/win. :)
Posted by missy at 10:14 PM

Labels: how to, ideas, my world, projects, worth the money

such a good idea! Though my nephews like to make their own creations and like to intermix the pieces too. So i guess that wouldn't work for them. But such great organization.

What do the letters on the right stand for?

That's the "system" I referred to in my comment to Rob. Each of the kids have an initial (Sam got S) that wouldn't really make sense to others, but they know what letter is theirs. :)