A few weeks ago, Jeff and I received this in the mail:

It took some serious shifting to manipulate our calendar enough so that we could attend, but quite a few of our friends had also been invited and the word on the street was that it was going to be really fun.  The fact that the hosts were a mystery just added to the adventure.  So I submitted our RSVP and then got an e-mail or two with some instructions for the evening.  One contained a picture clue of the meeting place (we figured out it was the train station).  If we couldn't figure it out from the clue, we could ask for more information, but it would cost us points that night.

Jeff and I were asked to be team captains - we were the Marauding Monsters.  On the morning of the big event, we found this on our porch: 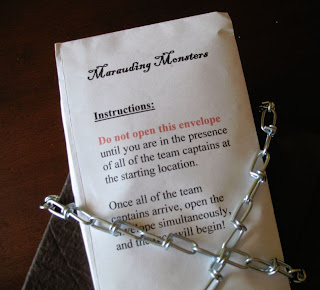 We dutifully informed the rest of our team of some additional instructions we received with the locked Book of Secrets and we all promptly met at the train station that night with the other teams.  We opened our envelopes at the same time and each one contained several puzzle pieces.  When all teams combined the pieces, it was a poster with a riddle telling us how to open the locks on each book which would contain the rest of the instructions.  It was a mad dash around the train station to count various items, add 100, then subtract something-or-other to get the three digit number which would free the lock.  And then we were off. 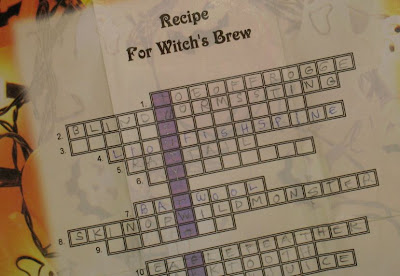 The object of the evening was to find 19 apothecary vials, hidden all over town, and write down the ingredient listed on each which, when listed all together, would ultimately reveal the final meeting place.  The ingredients were things like Rat Tail, Blind Worm Sting, Tar, and Skin of Wild Monster.  In the Book of Secrets, there were 19 pictures giving clues to the location of each vial.


Add all of this to three special challenges throughout the evening (like a roller skating race and popping balloons with a bow and arrow) and it was a well planned, crazy, super fun evening.  Our hosts ended up being a couple who just moved to the area.  They go to church with us and have a darling family.  It was fun to get to know them a little better and to be a part of their Halloween Challenge.  There is already talk about next year.  I can't wait!
Posted by missy at 9:36 PM

wow- lots of planning for this for sure! i hope you have a great time!

That sounds like a blast. I love a good, well-planned party.

By the way, I hope things are going well with your new schooling situation. I applaud you for having the courage to change your circumstances. I may be a coward or we may be too late in the game for my senior, but I don't really know how to fix ours. I just hope it gets better next semester.

Did you have a chance to read that article from the New York Times? I thought it was amazing.

Oh my goodness! What a total blast! I think you need to add us to your new friend's friend list!!!!