'Tis But a Scratch

Sadie signed up to play in the Homecoming powderpuff football match. During practice a couple of weeks ago, while running to tackle a defendant who had intercepted the ball, Sadie slipped on wet grass and caught herself with her left hand as she went down hard. She laughed it off at first, but then realized her left wrist looked a bit wonky. I got a surprisingly calm phone call that went something like, "I think I broke my wrist. You should probably come pick me up now." 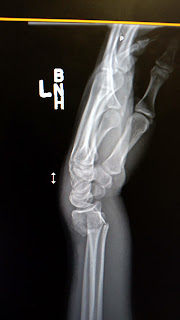 Four hours in the Emergency Room verified that Sadie's wrist was broken. The end of her radius was tipped back and, despite more than one attempt to bring it back into alignment, she was put in a bulky cast and told that surgery might be needed. We were sent home with instructions to see an orthopedic surgeon within a few days.

Sadie didn't miss a beat; she was at school the next day. One of her biggest hurdles was not being able to type so some of her teachers gave her extra time to complete assignments, but overall she wasn't going to let this slow her down. Four days later, we took her to the orthopedic surgeon. He said she would need surgery to either 1. manipulate the bone into place and hope it heals properly, but often it will tip back again or 2. put in a plate to hold the bone in place and solve the problem. At his recommendation, we opted for number 2. He was able to schedule surgery the next day. 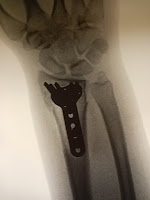 Sadie's biggest fears are doctors and needles. She really isn't scared of much else. To keep her mind off the surgery, she attended her first two classes the next day. I picked her up from school and we went straight to the hospital. Despite her fears, Sadie was so brave as they inserted the IV. For her, that was the hardest part. Then before we knew it, she was waking up from surgery and prepping to go home.

The orthopedic surgeon assured me that everything went well. He even stayed longer to stitch her up himself to make sure it was done well. :) A little over 6 hours after we arrived, Sadie was given the green light and we headed home. She even insisted she was well enough to attend a couple hours of a college softball game that some friends were playing in that evening.

Most people would settle in and take a couple of days to rest, but this was Homecoming Week and Sadie had been looking forward to Decade Day for a few weeks. So the next morning she got all dressed up and headed to school. She made it through like a champ and definitely rocked the awesome '80's, complete with big hair, acid washed jeans, and Jeff's high school letterman's jacket from 1987. 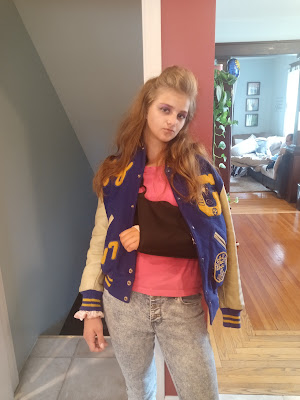 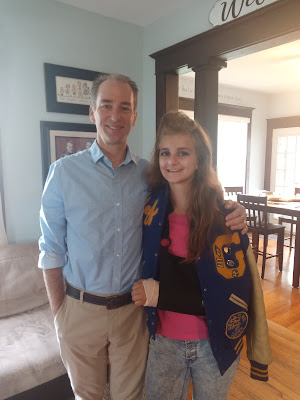 Since then, Sadie's hardly complained. We're hoping she graduates to a removable splint next week. And then it's on to a full recovery shortly after. I'm telling you, this girl is tough!
Posted by missy at 5:40 AM

Older Post Home
Subscribe to: Post Comments (Atom)
Years ago, my aunt had a book called "14,000 Things To Be Happy About". Page after page was filled with lists of things that made the author smile. Inspired by the idea, this blog is my list...

missy
I am a mom of 6 and a member of the Church of Jesus Christ of Latter-day Saints. I enjoy baking, reading, lettering, playing games, writing letters and all things Scottish. Overall, I can say that life is good!