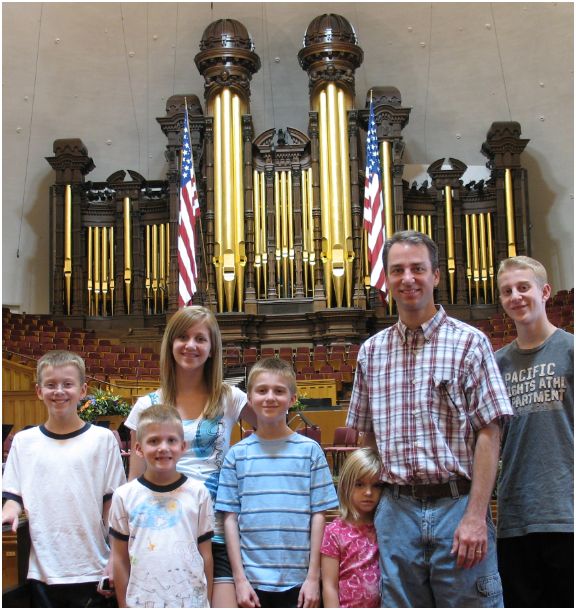 We visited Temple Square near the beginning of our vacation.  The Tabernacle holds a special significance for me because I used to be a Church Service Missionary* as an usher on Temple Square.  As part of my service, I attended Music and the Spoken Word every Sunday and ushered the tour groups in the Tabernacle (the Conference Center wasn't built yet way back then...).

It was fun to take the kids to the Tabernacle and show them the world famous pipes.  Jeff was explaining to Sadie that the pipes are the image we see on our hymnal at church.  Sadie thought about that for a few seconds then asked, "Then why doesn't it say HYMNS?"  An honest question!  :)


*During my year as a Church Service Missionary (1994-95), besides Music and the Spoken Word, my responsibilities included ushering at various concerts and other events held on Temple Square.  I was asked to usher and sit with President Hunter's family during General Conference when he was sustained as our prophet.  I later ushered at his viewing, standing near the head of the casket to make sure no one crossed over the guard ropes, in the Administration Building.  Then I ushered and sat with President Hinckley's family during the solemn assembly when he was sustained as the prophet.  Between sessions of conference, I was invited to attend a luncheon for the choir at the Lion House where President Hinckley joked with "his choir."  Assigned to stand near the podium during a fireside in the Tabernacle, I literally brushed shoulders with President Hinckley when he came in to take his seat.  I also ushered 2 or 3 sessions of the dedication for the Bountiful Temple (overflow was held in the Tabernacle).  I didn't fully appreciate those experiences then, but I am very grateful for them now.  This was just something I did on weekends or for special events, but it was a great time in my life.
Posted by missy at 7:10 PM

Glad you enjoyed your trip. The kids are counting down the days until our trip to Utah next month. I had that same experience ushering in the tabernacle and am excited to share it with my kids!

Wow what a great experience you had!!! How cool!

That's great that you could take your kids there and share some of your experiences with them. Last year we were in the Seattle area and I was able to take my family to a few of the places I served while I was on my mission. They got to see where I lived and the homes of a few people we taught. It was neat to share it with them.

welcome back - it looks like you had a great time!